The ‘too dark’ print after bleaching and redevelopment in lith developer.

I was never happy with the prints I made of this negative (detailed here) so thought I would take the worst of two, which was far too dark, and see if I could improve on it with some post-processing.

I been doing some 2nd-Pass lith on the ‘Old Roses’ print that appears in the next post and so popped the dark print of this one into some plain water to soak for 5 minutes. The beauty of the 2nd-pass lith process is that all steps can be undertaken in normal room lighting. 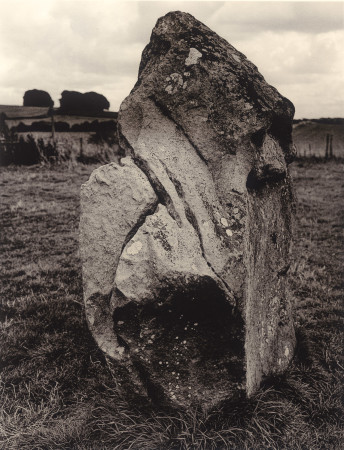 I then bleached it in re-halogenating bleach (30g potassium ferricyanide + 5g potassium bromide in 1000ml of water) and washed it in running water for 5 minutes. Now normally, this would return the image to an even light brown colour but, because this print had been gold toned, the bleached-out colouration revealed the effect of gold toning rather well. 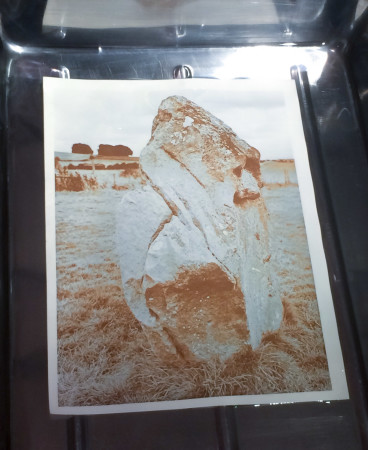 The print in a tray of plain water after bleaching.

Gold toners actually give a bluish caste, and here it is clearly visible in the lighter areas of the print. In the darker areas, not all the silver has been toned by the gold and so that untoned silver has been turned the light brown colour I would expect (slightly darker due to the protection offered by the gold).

The lith developer I had made up for the ‘Roses’ print was LD20 (10ml A + 10ml B plus 380ml water, a dilution of 1+19). It had worked fine for that print, which had been made on the slow, silver chloride Fomalux contact paper, giving me time to judge when the colours were as I wanted them and pull the print out. With this print, made on FOMA Fomatone MG Classic, as soon as I put it into the developer it immediately reverted back to black!

Hmmm, okay, bleach it again and dilute the developer this time!
I added water to the 1+19 LD20 to make 1200ml, a dilution now of 1+59. This time the redevelopment was much slower and allowed me to pull the print when I had a nice mix of bluish and brownish black tones. Unfortunately, as is often the case with 2nd-pass lith prints, the colours change during washing so that the end result is nowhere near as ‘colourful’. However, I’m much happier with this print (the one shown at top) than I was with its progenitor although it has something ‘weird’ going on the sky to the left of the stone’s top. Not sure what caused this, but such artefacts often crop up in prints that have been through multiple processing steps.

You can display them both side-by-side if you click each to enlarge and move them around on your screen.