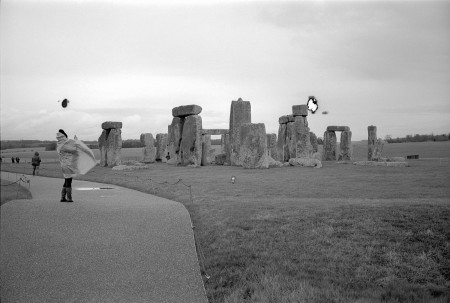 6×9 negative with some obvious flaws!

You can never be quite sure what you are going to get with film. This negative, one a series of 8 exposures taken on 120 Kodak Tri-X film, has ‘mystery artefacts’ and I’m not sure what caused them.

The main ‘blob’, on the right, seems to be the cause of the other and is actually a physical presence on the emulsion of the film. It appears on Frame 7. The faults repeat on adjacent frames and are the same distance apart, 4.5cm, but with varying and diminishing intensity, as this composite of the affected area on each negative shows. (It is not visible at all on Frames 1, 2 or 3.) 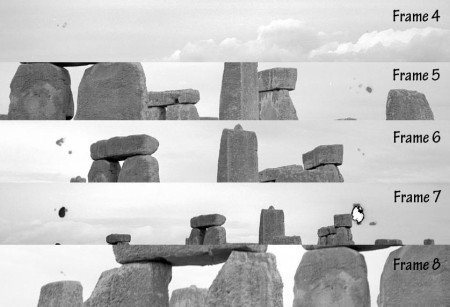 So what on earth could it be? The equal spacing seems to indicate that it must have happened when the film was rolled, but before exposure or after?
Although the main blob is a physical thing, the others are simply areas of the emulsion that have either been prevented from being exposed, or prevented from being developed. Here’s what the main artefact looks like in an enlarged scan. 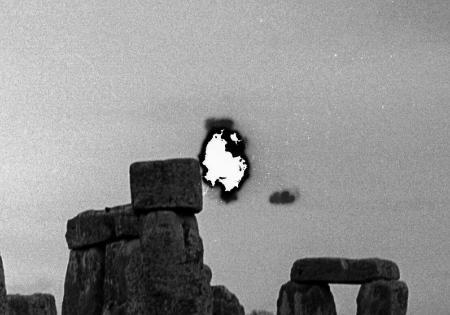 What is curious is how the opaque object has masked the emulsion yet produced a halo of unexposed or undeveloped emulsion around it. Subsequent repeated artefacts are just areas of unexposed or undeveloped emulsion, with no physical object.
But how could this ‘thing’ affect the rolled film when there is backing paper between it and the next layer of film? And why does the shape and intensity on subsequent frames vary so much?

I don’t yet have an explanation for this one. Any ideas would be welcome.

Of course it would be at its worst on the one frame that I might have considered worth printing. The rest of the images of Stonehenge are pretty run-of-the-mill shots taken in poor light. There’s no way that I would print this conventionally, but a few minutes tinkering in Adobe Lightroom at least gives an idea of what might have been a reasonable picture of a cold and windy day at Stonehenge. 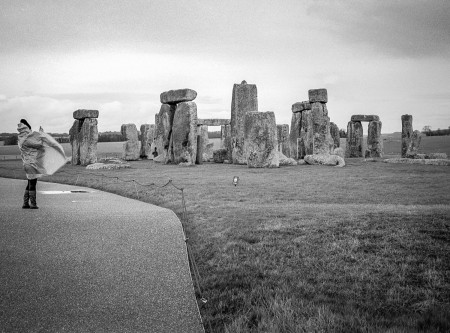 UPDATE: Thanks to the ‘wisdom of crowds’ for the solution to this mystery.

I posted about it on the Film & Darkroom User Forum and replies led me to discover the cause. A fragment of the camera’s foam light-seal, all of which I have now discovered has deteriorated, had attached itself to the large roller preceding the take-up spool in my Fuji GW690III. Every time the film was wound on some of the now very sticky foam material had transferred itself to the film, at regular intervals of course!
So the contamination actually started at Frame 4 and varying amounts of the foam were impressed on the emulsion at each wind on. The major artefact at Frame 7 was where most got attached. 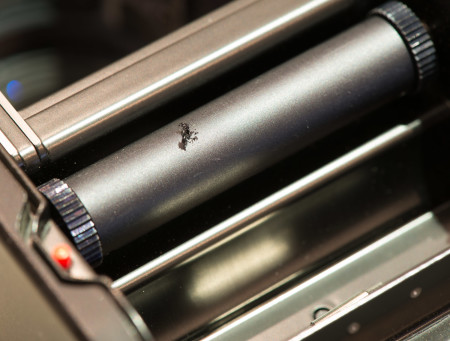 So it happened after exposure, preventing development of the areas underneath it. Most must have washed off in processing, except for the massive piece on Frame 7, which remained on the film, resulting in it printing as white.