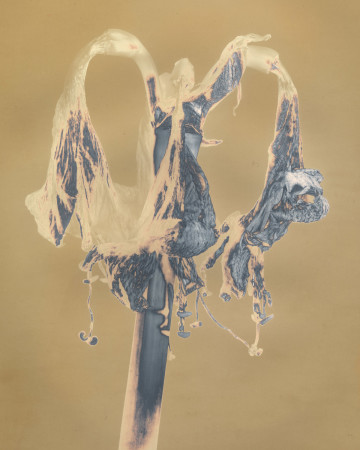 An example of the effects that can be achieved in colour in black and white.
This started life as a straight contact print on Adox MCC110, but it was a too dark, rather flat and unappealing. I have not yet achieved a silver print that matches the scan of the 8×10 negative detailed in this previous post.

I bleached the too-dark print to completion in ferricyanide, washed, and then redeveloped in Moersch EasyLith 1+1+40 until the required end-point was reached. The print was then washed and dried without further fixing. The colours were good but the image was still flat and lacking in the desired contrast. The background (originally dense black) had become patchy and distracting and a lot of the colour was lost in the washing and drying. See below: (this scan looks better than the print did!) 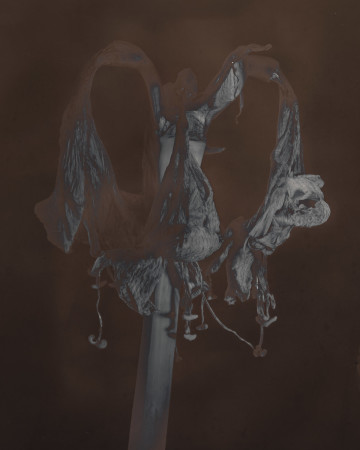 After the first bleach/redevelop cycle.

I decided to bleach the print once again, wash, and then redevelop in the same EasyLith. Between this and the first process, the print, which had not been fixed after the first bleach and partial redevelop, had been exposed to room lighting. The remaining undeveloped silver salts in the paper were therefore now exposed, resulting in a partial reversal effect. After bleaching, which took only a minute, the redevelop was dramatically different. Intense blues and salmon pinks appeared quite quickly but the background remained a pale peach colour. Development was rapid, with the colours changing all the time. I used an acid stop bath to arrest development at the point where the print looked as I wanted but I knew the colours would not hold. I used a simple sodium thiosulfate/sodium chloride fixer for the briefest time, removing the print to running water before the colours faded too much.

The final print is quite appealing, although some of the intensity of colour was lost in the washing and drying. The scan shown at the top however is very close to how the print looks now. I’m not sure it will remain looking as it does, given that the paper has not been completely fixed. Time will tell.