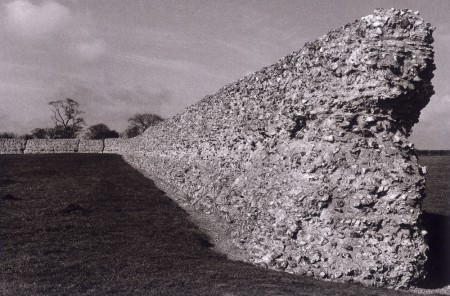 The paper is Slavich Bromportrait, Grade 3, and three prints were made in quick succession using the same developer. Remarkable consistency was obtained, with the ‘snatch point’ remaining more or less the same for each print (which were developed separately). The straight print in LD20, without any toning or after-treatment looked like this: 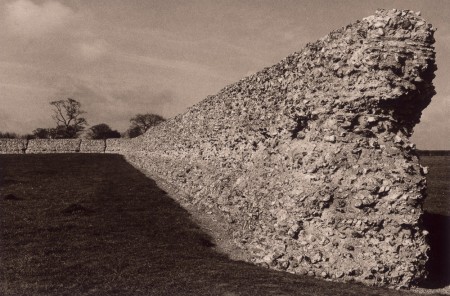 One of the three identical prints was toned in Tetenal Gold for 5 minutes (shown at top). One other was put through a copper bleach for redevelopment, the ‘two pass lith’ process. 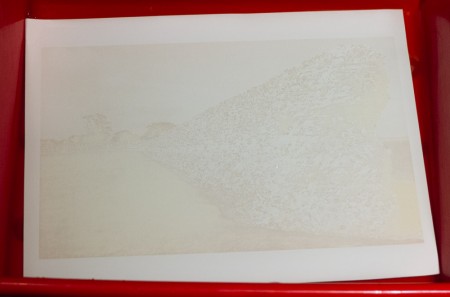 The print after bleaching in copper bleach.

For anyone trying this, it is important to note that the copper bleach works very differently to a standard ferricyanide bleach. It take much longer and nothing appears to happen for some minutes, then the deepest shadows bleach first, taking on a peculiar pseudo-solarized look, and then the remaining image tones bleach gradually until only a faint yellowish image is left.
I had bleached a test strip first and the result – when redeveloped in LD20 1+1+20 – produced some beautiful subtle hues, from coral pinks to brown, but these were fugitive and disappeared when the test strip was fixed. This is a well known problem, documented by Tim Rudman, who has experimented to find a way of retaining the colours without significant success. The only sure way they might be kept, for a time, is by not fixing the print after second redevelopment, but if this stage is omitted the print will undoubtedly change over time as any remaining undeveloped silver halide will eventually discolour on extended exposure to light.
Another method, suggested by Tim Rudman, is to use a weaker alkaline fixing bath. Recipes for these may be found in the ‘Formulae‘ section of this site. These fixers work better with some papers than with others; I have yet to do any definitive tests.

So I diluted the LD20 to 1+20 and developed the bleached full print at 30°C in room lighting. The result produced the same subtle hues but  there were also some strange vertical bands – visible on this photograph taken whilst the print was still wet and in the wash dish – which were not present, or at least not visible, on the original print. Their cause is unknown, but it may be agitation-related,  even though this was vigorous and continuous. 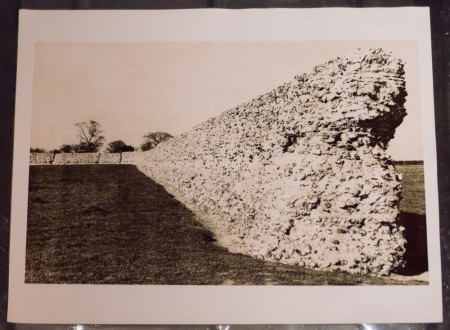 I decided to bleach the print in copper once more in an attempt to reduce the banding, but to no avail. The third development of the twice-bleached print produced a result that was much lighter and more contrasty than the first pass as some density was lost in the bleaching. I did fix the print before final washing so some of the subtlety was lost, but the colour remains pleasant enough. Here is the final –  heavily abused! – print after drying: 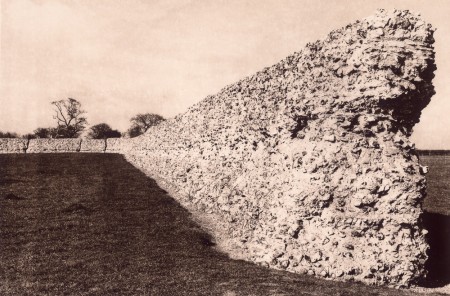 The print after two bleach and redevelopment stages.

Apart from the very visible banding, it’s an acceptable print, with a tonal range and colour that improves on the straight LD20 print shown second from top. The two pop-ups may be opened and viewed side by side for easy comparison.