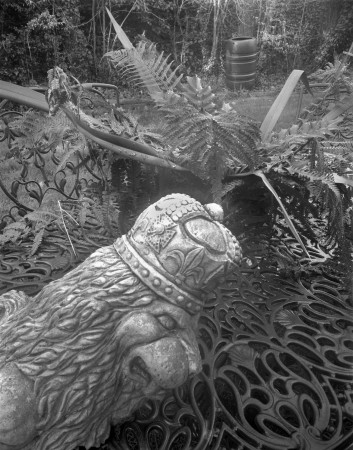 Ten years ago I acquired three Zeiss Protar lenses from the auction sale of Olive Cook’s effects, following her death in 2002. These lenses had belonged to her late husband, the photographer Edwin Smith.

I’ve never really done anything much with them since they were all shutterless and I didn’t have lens panels to fit them (easily remedied, but I never got around to it!). But a recent enquiry from a Dutch photographer, Maarten Rijnvis, asking about my experiences with the Protar 8.5cm, prompted me to finally do some ‘proper’ tests. 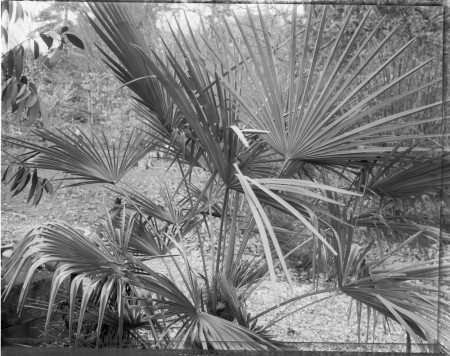 Previously I had only used the 14cm Protar on my old MPP 5×4, making one Polaroid Type 55 negative (shown left). This confirmed the excellent quality of this lens, which dates from around 1911. I had not used the 8.5cm as the MPP would not allow close enough focussing without a sunken lens panel, which I do not have. The third Protar I have is the 32cm, which I have used on my 8×10 . 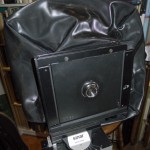 So this time around I decided on a makeshift fastening of the 8.5cm onto a Sinar panel and used that with a bag bellows for the test using my Sinar P.

Maarten was interested in how well the lens handled a subject with a large foreground object in focus whilst retaining focus into the distant parts of the scene without recourse to camera movements. I chose the subject with this in mind (shot in my back yard) and placed the stone lion’s head about 12 inches (30cm) from the lens. 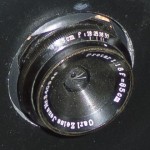 The Protar 8.5cm has a maximum aperture of f18 and stops to down to f50 in closely spaced marked steps of f25 and f36. It goes beyond f50, which is almost a pinhole, and I stopped down to this extreme when making the photograph shown at the top. I estimate that this is around f64, and the exposure bore this out.

I used TMax 5×4 sheet film rated at 400 ISO and the exposure was approximately 2 seconds at f64. Approximate simply because I guessed it based on how long the lens cap was off before being replaced!
The film was developed in Rodinal 1+25 for 5 minutes with continuous agitation at 20°C.

The image shown at top is a scan from the whole negative. It’s not pin sharp, but it’s close, and at f64 it’s unlikely that it would be, given that diffraction comes into play. Also, there may have been some slight camera movement due to the manual lens cap removal. I need to rig up a shutter to see if it makes a difference.
But it does show almost the same degree of sharpness across the whole image, bearing in mind that no camera movements were used to shift the plane of focus. The actual focus point was on the white twig just to the left of and behind the lion.

There is a curious area of what looks like flare between the lion’s head and the water butt. This could be lens flare or it could be dust in the lens. The lens is so small that the smallest particle would probably make a big difference at such a small aperture. But as the low sun was just catching the top of the lion’s head, it could be flare from this, being an ancient uncoated lens after all. I need to do further tests and will post them here when I do. 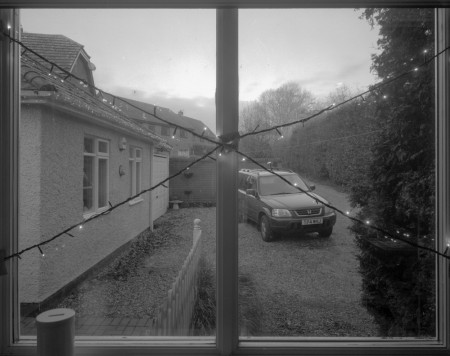 Update: The photograph here is worth including simply because it shows the remarkably distortion-free rendering of this wide angle lens. Taken a week ago as a test of the makeshift lend board, this was the first exposure made with the Protar. Looking through the studio window late in the afternoon, exposure on TMax 400 was around 10 seconds at f64. Negative developed in Rodinal as above. Overal sharpness is uniform again and there is little evidence of flare in this negative scan.