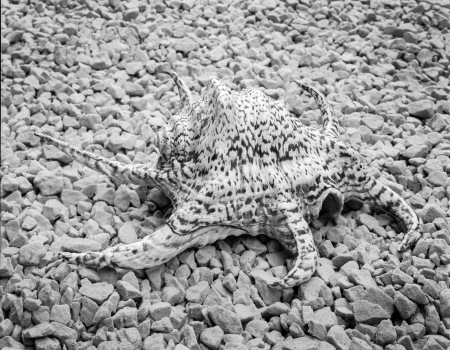 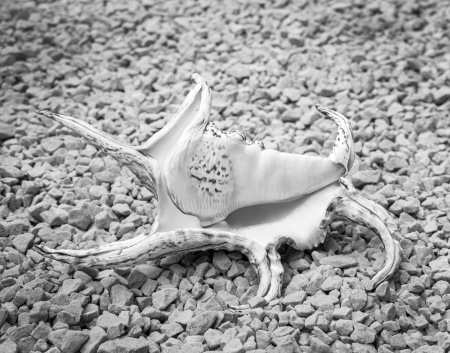 I wanted to place it on a background that conveyed its likely environment in nature to some degree and enhance the ‘camouflage’ appearance. A side-effect of this, in the case of the first image and in the words of a friend, was that the hard and inflexible shell appears to take on a more sinuous, flexible appearance, as if it’s making its way across the stones, octopus fashion.

This was photographed as a further means of familiarising myself with the Sinar kitted out for 8×10 film. You’ll notice that the aperture used is different for each (details appear on the pop-up image captions), as I found that the depth of field required for overall sharpness, allowing for the extensive camera movements employed for both shots, was less for the second one, saving a valuable few seconds exposure (20s instead of 35s). The Adox film appears pretty forgiving of reciprocity failure, so exposure was based on an incident light reading coupled with the camera extension, which was massive, the image on film being slightly greater than 1:1.

In fact, one extra accessory that would be useful is an extension to my right arm, as it’s nigh-on impossible to reach the front focussing knob while viewing the ground glass! Of course, the latest Sinars with digital backs and motor-driven controls allow you to sit comfortably at your laptop and adjust swing, tilt and focus while viewing a live image on screen. You don’t need to view your laptop under a black cloth either…
But the chances of obtaining a second mortgage and paying the price of a medium-sized luxury car to get one of the latest Sinars is, to say the least, remote. Anyway, you get more exercise doing it the old-fashioned way.