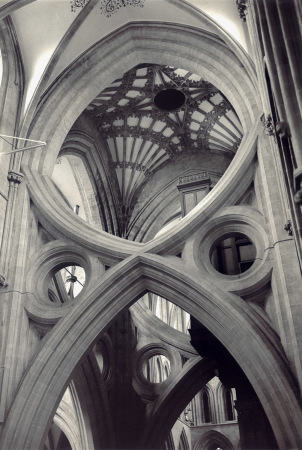 I had a request from a friend for a print of this image, which had never been printed previously. Rather than using a negative scan and inkjet, I made the print conventionally, printing the full negative area. This is a scan of the 12×16″ print.

The story behind this image is documented on my Flickr page and I reproduce that content here. It forms part of my occasional revisiting of locations photographed by Edwin Smith, although when this photograph was taken (1999) that project had not been conceived.

This is what I wrote about the image on Flickr:

In producing the ‘Sea of Steps’ image comparison I came across this other photograph I made at Wells Cathedral that day. (Mine is on the right)

The strainer arch, or scissor arch, is most unusual and a perfect example of its type. Built in the 14th century, its ingenuity and beauty continues to amaze.

I had not realised that my photograph of it was taken from precisely the same spot that Edwin Smith set up his camera in 1968. I was certainly not aware of his photograph when I made mine in 1999 and it was only on reviewing my film negatives and comparing them with his image that I realised the synchronicity. I think I was more fortunate with the light than he was…

I still find it remarkable that my photograph matches Smith’s so closely in viewpoint and framing, almost uncanny.
The image used for the pairing in the Flickr post was made from a scan of the negative and lacks the shadow detail later obtained in the conventional print.

The print shown at top has been made on 12×16 inch Adox MCC110 Premium Glossy using a condenser head and Multigrade 2.5 filtration. The negative is on 6x9cm Tri-X, using my Fuji GW690III hand-held. The print was developed in Agfa 108 high contrast developer, used undiluted, for 2.5 minutes at 23°C.

It was then toned in Kodak Selenium Toner diluted 1+4 at 23°C for 10 minutes. I was surprised to see that it started to split-tone and the scan of the print (made in colour) emphasises this somewhat. The print was scanned before retouching, hence a few spots and dust marks.