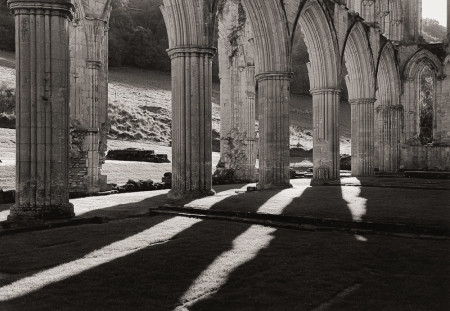 Early morning light sweeping through the arches of the ruined abbey.
Tri-X 120 developed in PMK developer. Scan of a print made on Adox MCC 110 Glossy. 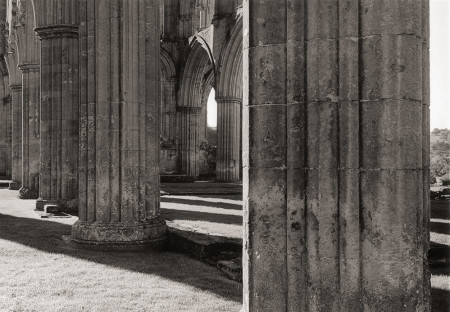 Column detail at Rievaulx.
Tri-X 120 developed in PMK developer. Scan of a print made on Adox MCC 110 Glossy.

On my visit to Rievaulx last year I had only photographed on digital, this year I resolved to shoot film. The motivation was to try and capture something of the amazing tonality and texture exhibited in a processed digital image from the last visit, shown here: 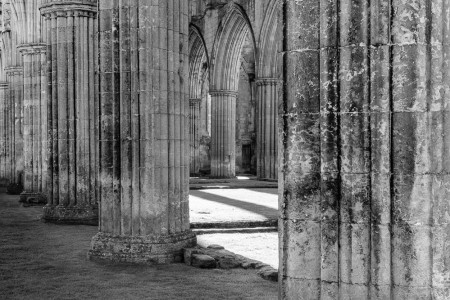 The exercise of re-photographing on film was really taken on as a technical challenge to myself; to see if I could achieve through ‘analogue’ technique that which was readily attainable with digital. Levelling, positioning and framing with a rangefinder film camera like the Fuji used here requires quite precise working, as does the subsequent chemical processing, unlike the electronic levelling and metering capabilities of my SLR and the ease of processing the RAW file in Adobe Lightroom 5.

I don’t think the prints shown at top have quite matched the look I am seeking, but that’s down to my printing technique.
The negatives are fine, made on my Fuji 6×9 using Kodak Tri-X rated 320ISO and processed in PMK developer, 10+20+1000 for 11 minutes at 22.5C, with 30s initial agitation and then one inversion every 15s. The exposure given was loosely based on the zone system method, safe in my knowledge that the wide tonal range could be adequately captured on this film in PMK. The brightness range is quite extreme, but the beauty of the PMK process is that highlights rarely get ‘blocked up’ and provided that adequate exposure is given for the shadow detail required then detail in the highlights is retained.

Another feature of PMK is the fineness of grain attained, even with a relatively fast film like Tri-X. The negatives have the typical yellowish hue associated with pyro developers and this can cause problems when printing on multigrade papers like Adox MCC, as yellow filtration reduces contrast. These were printed using a condenser light source, to offset the further reduction in contrast that a diffuser head would have given. This also results in a sharper print, with any grain being more apparent. The filter used for the prints at top was a Multigrade No.3 and they were developed in Agfa 108, a high contrast developer, used undiluted. So you can see that the negatives are quite soft gradation, requiring the boost offered by enlarger type, paper grade and developer to achieve the contrast sought.

That said, the next printing session will attempt to get more micro-contrast and tonality in the stonework and a more even tone overall, more akin to the digital image – which was not viewed whilst printing the film examples shown here.

As an interesting aside, the columns featured in both the film and digital version of the second picture are the same (not an identical viewpoint, but close). After I had scanned the silver print I compared an enlarged area of it with the same area from the digital image: 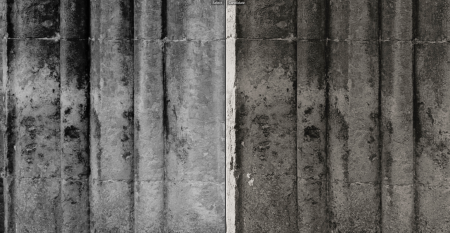 The same area from images of Rievaulx made on digital and film, side-by-side in Lightroom.

As you can see, the film image is slightly sharper. But the area of the digital image had to be enlarged more to match the scale of the film one, so it’s perhaps unsurprising. For the next print in this series, I made sure that I made a digital image of the same subject from the same viewpoint, so a more relevant comparison can be made.
The film image (taken with a Fuji GW690III) was made at f22, an aperture that usually results in some loss of definition, but I am pleasantly surprised at how little seems to have been lost. No doubt the digital image could be sharpened to match, but it’s an interesting little observation about how film and digital still differ in their rendering – albeit a not very ‘scientific’ one in this case. The digital image appears sharper because of the enhanced contrast introduced during Lightroom processing. the original RAW file is quite ‘flat’ in comparison, as shown here: 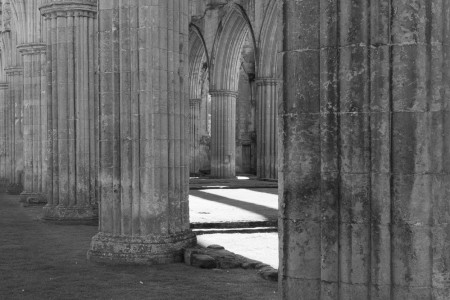 The original RAW file of the digital image shown above, unprocessed except for conversion to black & white.

Clicking on any of the images  brings them up at larger size and they may be compared side by side on screen.
Note that the second pillar from the right on the film image is the third pillar from right on the digital version.