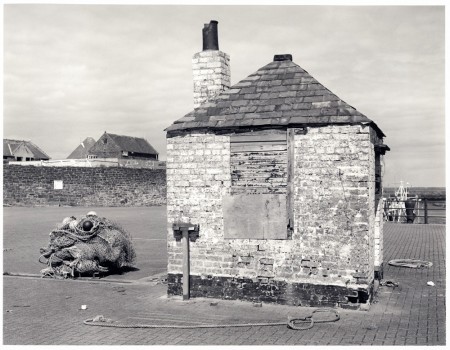 I discovered an undeveloped roll of 120 film in the cupboard this week. I had no idea what was on it.

Part of the magic of film photography is that once the photons have done their work on the little silver halide crystals in a film emulsion, years can go by without that impression ever changing significantly. I felt confident that the film would process fine, despite it already being out-of-date at the date of exposure (which turned out to be August 22 2011).

As it’s been a while since I did any film processing or printing, my stocks of developer were limited to proprietary brands (Rodinal, ID11, Neofin Blue, et al.) but I wanted to stick with my current favourite, PMK. I like it because it retains highlight detail so well. I’ve never had a negative with blocked highlights since using it.

Not having any ready-made, it was time to weigh out the chemicals and mix my own for the first time. I dug out the trusted Darkroom Cookbook and found the Gordon Hutchings 1991 formula. All the ingredients were in my chemical store. The recipe – and my notes – are in the formulary section of this site.

The Massive Dev Chart gives rather wide-ranging recommendations for Fuji Neopan Acros 100 in PMK, and all with a one-stop speed drop (50 ISO). As I knew I had exposed it at 100 ISO I decided to take an educated guess at development time based on the temperature at which the solution ended up when mixed and the need to boost the ISO; I gave it 13 minutes at 23.5°C, with intermittent agitation (I gave the film a 3 minute pre-soak in plain water, with agitation, before development, as I’ve found this is useful in preparing emulsions for PMK action). Plain water ‘stop’ bath for 30 seconds and then home-made Agfa 304 Rapid Fixer for 4 minutes completed the process.

The result: perfect negatives, and at this point I discovered that there were only four exposures on the roll (shot on my Fuji GW690III) and that they had been taken in Maryport, Cumbria, over a year ago. I liked the tonality of this shot and it does show the remarkable quality attainable with Acros film, which I had only used once previously. On the left is an enlargement (via scan) of a small section of the image.

The print was made on some very old Ilford Multigrade IV 1K Fibre paper (well, the photo wasn’t that good that it warranted expensive new paper!) processed in some old and dark brown Dektol diluted 1+4 for 2 minutes at 22°C.

Although Ilford Multigrade doesn’t tone in selenium very well, I decided to enrich the shadows a little and generally ‘brighten’ the image by giving it 4 minutes in Kodak Rapid Selenium 1+4 at 22°C. If you can live with the image colour shift towards purple-black then it does have a noticeable effect. The scan used above is in colour and reproduces the final image tone quite well. 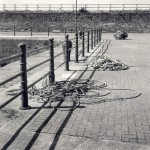 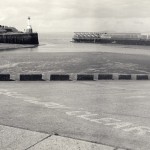 Of the three other exposures on the roll, I printed two. These are shown to the left and right here. All on the same paper and all selenium toned.

Perhaps none of the images are ‘keepers’ from an aesthetic or emotive standpoint, but they serve to illustrate quite well what can be achieved with old film and paper coupled with home-brewed chemicals.