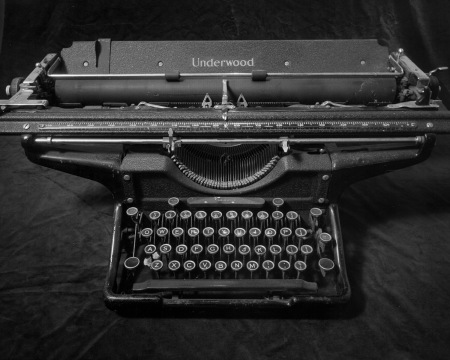 Part of the ‘Memoria Vitae’ series

I originally started the Memoria Vitae series five years ago, with this image. The purpose being to record those things that have special meaning to me, though various connections, but which may seem insignificant to others.

This typewriter belonged to my father. He used it to type up wide spreadsheets for his ‘hobby’ – a local financial enterprise that benefited many – in the days before computers and Excel, the numbers typed being worked out on an old mechanical adding machine that Babbage would have recognised. I’ve kept it since he died in 1994, partly because of its associations, but also because it’s quite a beautiful object.

But it weighs a ton and has never found a place to be displayed properly, just stored in lofts and garages for twenty years until it was getting pretty run down. It still works, although a new ribbon would be useful.

So, I decided that the time had come to pass it on to someone that could appreciate it, restore it, and hopefully use it for typing once again. I advertised it locally online and it was gone within minutes, literally. That gave me just 24 hours to get a photograph of it on the 8×10 camera.

This is the set up: 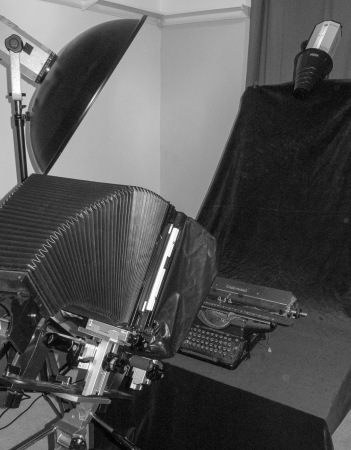 The camera is fitted with my 14cm Carl Zeiss Jena Zeiss Protar shutterless lens, requiring use of the bag bellows at the front and a manual ‘cap off – cap on’ time exposure. This lens once belonged to the photographer Edwin Smith and the link shows the three Protars of his that I have.
The bellows at the back is simply for viewing the ground glass screen, being fitted with a binocular magnifier. This is essential when using this 1911 vintage lens, the maximum aperture of which is f18, giving not exactly what you would call a bright image to work with… the images it produces are quite exceptionally sharp though.
Here’s a closer view of the camera without the viewing bellows, showing the immense counterweight I needed to balance the whole thing. 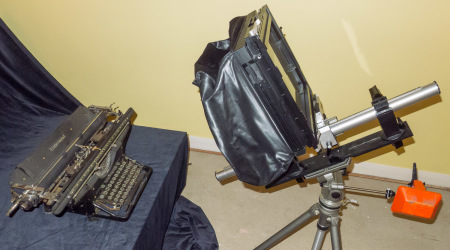 And this image shows a closer view indicating the lens tilt required to get the focus plane I needed. The lens cap can be seen dangling from the lens on a piece of blu-tac… 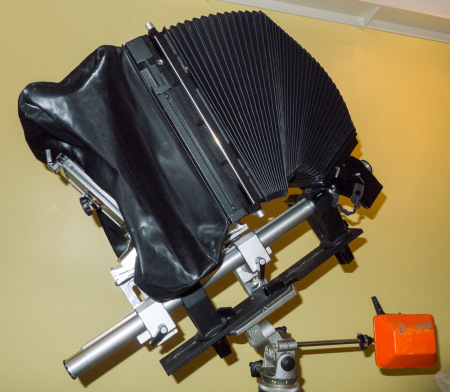 Focus and lens tilt were largely a matter of trial and error, it being incredibly hard to view the image edge to edge on the ground glass due to its faintness. Subjecting yourself to this kind of ‘camera brutality’ really takes one back to the early days of photography; the images are hard won, but worth it.

This is what the typewriter looks like in digital reality. 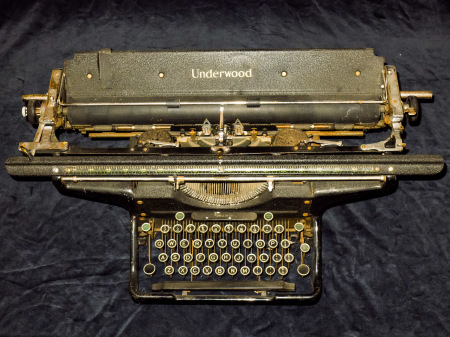